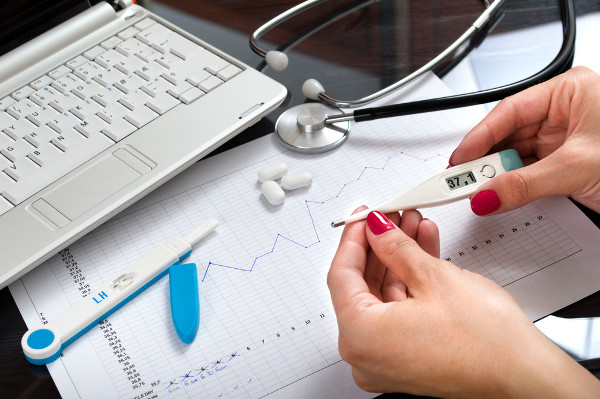 If you are trying to get pregnant, knowing when you ovulate is key. Knowing this can significantly reduce the amount of time it takes to conceive!

When do you ovulate?

Ovulation typically occurs between 10-16 days before the first day of your period. Every woman is different and so are their cycles - your cycle length and ovulation day can also differ from month to month!

After release, the egg is only viable for 12-24 hours. If not fertilized within this time the egg will begin to disintegrate, and will be carried out with your next period. But that doesn't not limit your fertile window to just this short time period. Sperm can live for up to 5 days in the woman's body (in the vagina, uterus and fallopian tubes), which extends your fertile window up to 5 days prior to ovulation.

To estimate when you are likely to ovulate, find the expected date of your next menstrual period. Count back 14 days, and then another five days. The additional five days you counted are considered your most fertile days. It is best to consider your fertile window from the beginning of this five day period, ovulation day and the day after. This gives you approximately a 7 day window to work with.

Pinpoint when it is best to try to get pregnant by predicting your most fertile days.

It may be difficult to accurately pinpoint ovulation unless you are charting your fertility each month.

Using a specialized thermometer (average $10 available at most retail stores) you record your waking temperature (either orally or vaginally) at the same time every morning, recording them on a chart and watching the patterns to determine ovulation and your potential fertile period.

If temperatures are taking correctly, this method is the most accurate at definitively detecting when ovulation has occured. Remember, BBT charting will show you when ovulation has occurred, possibly too late for successful timing (when charting is your only method), so it is best to use it in conjunction with other methods. Once you have several months recorded you will start to see your ovulation day pattern emerge.

OPKs work by detecting the Luteinizing Hormone (LH) surge in your urine. The LH is the body's chemical that signals to the ovary that it's time to release the egg. While it's important to follow each specific brand's unique instructions, the general procedure is to test urine at least once daily. The majority of OPKs require that you do not test with first morning urine (FMU) as LH isn't produced until later in the day.

Unlike with a Home Pregnancy Test (HPT), the theory that a line is a positive is not true for OPKs. The key to reading an opk is to look for a test line that is as dark (or darker) than the control line. Some women choose to test more than once a day as they approach ovulation as it is possible to miss the LH surge and never receive a positive OPK, despite ovulating.

OPKs come in a variety of styles and price levels, from a dollar or less a piece for a standard non-digital or more for a digital variety and can be purchased online or in most retail stores.

OPKs can only "predict" possible upcoming ovulation - they can not confirm it. It is best to use OPKs along with basal body temperature charting to confirm ovulation.

Cervical mucus/fluid is produced by glands in the cervix (within your cervical canal). During your cycle, the quantity and the consistency (texture and appearance) of cervical mucus changes - this is due to hormone fluctuations. As you approach ovulation, estrogen increases and you begin to produce the most fertile type of cervical fluid. You are considered most fertile when the fluid becomes clear, slippery and stretchy (often compared to raw egg whites).

Fertile-quality cervical mucus supports conception by providing a healthy medium in which sperm can survive and propel themselves. Fertile cervical mucus protects sperm from the naturally-acidic environment of the vagina and helps sperm to move through the cervix into the uterus. Paying close attention to the changes will help you time intercourse correctly and you can begin to understand your own fertility patterns.

Cervical mucus will move from dry, sticky or tacky (infertile) through watery or eggwhite (fertile).

While CM can be checked externally (from the opening of the vagina) cervical changes can only be checked internally (placing one or two clean fingers into the vagina and feeling for the changes with the cervix).

These signs can signal approaching fertility, allowing you to take maximum advantage of the days leading up to possible ovulation.

CBEFM's are basically mini-computers that read a more complex Ovulation predictor kit (OPK) to distinguish approaching fertility. They differ from regular OPKs in the fact that they don't just detect surging Luteinizing Hormone (LH), they also detect the rising estrogen. It learns your unique cycles and will adjust accordingly. As a result, it may take a cycle or two to see the full advantage of the CBEFM.

The computer unit will ask for a test stick if it feels that you could be approaching ovulation. Unlike OPKs, you use FMU (first morning urine) for the CBEFM. You insert the stick into the reader and it will give you one of three fertility ratings. Low (infertile), High (possibly fertile) or peak (the most fertile). The first cycle you use the monitor, it will jump almost immediately to a high reading as soon as it starts asking for test sticks. As you develop a deeper relationship with your monitor, the number of high readings will potentially decrease. Some women have reported only one day of high reading before a peak. Once you have a peak reading, you will ovulate anywhere with in the next 48 hours. After your first peak reading, you will have a second peak day. Following that, one more high reading and then lows for the rest of your cycle.

The monitor will warn you of the end of your cycle as it flashes "m" when you check it in the morning. This is helpful for women who aren't tracking their cycle every day. When/if your cycle starts, you simply reset it to cycle day (cd) 1 and start the process all over again.

NEXT: When to have sex