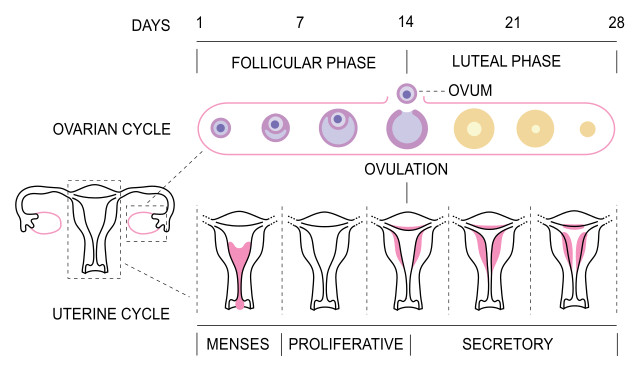 Ovulation is the release of the mature egg from the ovary. The mature egg bursts from the follicle in the ovary and is immediately picked up by the fallopian tube and carried towards the uterus. This usually occurs at the midpoint of a woman's cycle, around day 12 to 16, although this can vary greatly from woman to woman, and from month to month. If you are trying to get pregnant, knowing when you ovulate is key. After release, the egg is only viable for 12-24 hours. If not fertilized within this time the egg will begin to disintegrate, and will be carried out with your next period. But that doesn't not limit your fertile window to just this short time period. Sperm can live for up to 5 days in the woman's body (in the vagina, uterus and fallopian tubes), which extends your fertile window up to 5 days prior to ovulation.

Although they may differ for each woman, there are some indicators of ovulation which will help you determine when you are ovulating.

A few days leading up to and including the day of ovulation a woman's cervical mucus will become thin, clear and stretchy. This is known as “egg-white” cervical mucus. The consistency of this mucus is sperm friendly and helps their progression towards the egg.

Your basal body temperature (bbt) is your body's lowest temperature in a 24 hour period, and is taken immediately upon waking up (before sitting up in bed), using a basal thermometer. The day after you ovulate your temperature will rise by 0.5 to 1 degree fahrenheit and will stay elevated until your period begins (must be sustained for at least 3 days to confirm ovulation). Although it will not tell you in advance of ovulation, tracking your bbt will allow you to see if there is a pattern to your cycle and help predict your most fertile days.

Position of the cervix

Some women use the position of the cervix (the opening to the uterus inside the vagina) to help determine if they are ovulating. During ovulation the cervix will be soft, high, open and wet, as opposed to infertile times, where it is hard, low, closed and dry. It does take some time and practice to become familiar with the positioning of your cervix and it is not always a reliable method, as such, it should be used in conjunction with other methods.

Some women also experience one or more of the following symptoms during ovulation:

If you are trying to get pregnant, knowing if and when you are ovulating is of utmost importance. There are several methods to use that can greatly assist in pinpointing ovulation, including keeping a record of your cycle and symptoms, tracking your basal body temperature and cervical mucus, and using Ovulation Predictor Kits (OPKs detect the Luteinizing Hormone, which is the hormone that triggers ovulation).

An anovulatory cycle is a cycle when no egg is released and therefore ovulation does not occur. Although common for women at the beginning and the end of their fertile years, regular anovulatory cycles for women is not normal. Most women will not know until they start trying to conceive whether or not they ovulate regularly, as it is possible to have regular periods and not ovulate. There are many causes including hormonal imbalances, stress, certain medications or polycystic ovarian syndrome to name just a few.