The cycle and phases 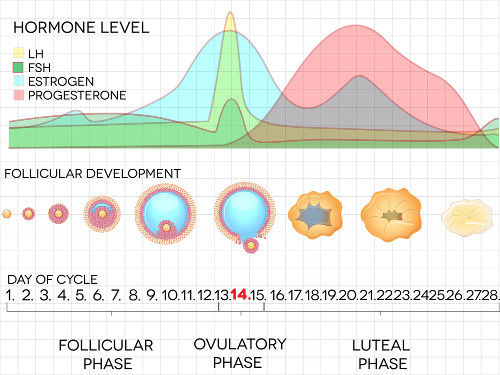 The menstrual cycle is a woman's cycle that prepares the body each month for pregnancy. It is controlled by hormonal changes that affect the ovaries and uterus. Your cycle can be described by 3 phases of either the ovaries (follicular, ovulatory, luteal) or the uterus (menstrual, proliferative, secretory). Day 1 of your cycle is counted from the first day of your period. The average cycle length is 28 days but can vary between 21 and 35 days for adult women. The following description is based on a 28 day cycle.

The typical period lasts 4-7 days, and is counted from the first day that there is bright red flow. Spotting before your period is not counted. During your period, the lining of the uterus that was present to support a fertilized egg is shed, if pregnancy did not occur.

Hormones: During the first week of your cycle estrogen and testosterone start out at their lowest levels and begin to rise.

Cervical Mucus: During your period you will not notice any cervical mucus.

During this time the pituitary gland secretes a hormone called Follicle Stimulating Hormone (FSH), which stimulates approximately 15-20 follicles to ripen in the ovary. Each one of these follicles contains an egg. As the eggs mature the follicles produce estrogen, which causes the lining of the uterus to start thickening in order to support a pregnancy should the egg become fertilized. High levels of estrogen in the body cause the pituitary to release Luteinizing Hormone (LH), which is the hormone picked up by most ovulation tests. The surge of this hormone causes the largest of the eggs (usually only one, but could be more) to burst from the follicle. This is the beginning of ovulation.

Hormones: Estrogen and testosterone continue to rise this week.

Ovulation is the releasing of the mature egg from the follicle in the ovary. Once the egg is released from the ovary, it is caught up by the end of the fallopian tube and carried towards the uterus, there is a window of just 12-24 hours in which the egg can be fertilized. In ideal conditions sperm can live inside a woman's body for up to 5 days, and may be waiting for the egg. If the egg is not fertilized within approximately 24 hours, it will disintegrate.

Hormones: Rising estrogen levels cause the surge of Luteinizing Hormone which triggers the release of the egg, estrogen levels then dip briefly after ovulation. Progesterone levels rise steadily until implantation occurs or the corpus luteum collapses.

Cervical mucus: The estrogen produced by the ovaries causes the cervical mucus to change. It becomes the consistency of egg whites, thin, clear and stretchy. This mucus is sperm friendly and allows for safe passage of the sperm to the egg for fertilization.

The luteal phase (which is also the secretory phase of the uterus) is named for the corpus luteum, a small yellow mass of cells. It is what remains of the follicle in the ovary once the egg is released. This mass of cells begins to produce progesterone which causes the uterine lining to become thick and spongy; ready to accept the egg should it become fertilized.

Cervical mucus: Progesterone also triggers the cervical mucus to once again become thick and sticky, and impenetrable to sperm. Since the egg is only viable for up to 24 hours after release, the body no longer needs to aid in the sperm's journey.

If sperm fertilizes the egg:

If the egg becomes fertilized it will travel to the uterus and implant in the uterine lining, this journey can take 6-12 days. When implantation has occurred the corpus luteum will continue to produce progesterone to maintain the pregnancy until approximately 12 weeks, when the placenta is well enough developed to take over.

If fertilization does not occur:

If the egg is not fertilized, or implantation does not occur, the corpus luteum will shrink and hormone levels will drop, triggering the uterus to release the lining and menstruation begins and the cycle starts again.

The corpus luteum can only last for 14 days if it does not begin receiving hCG (human chorionic gonadotropin, also known as the pregnancy hormone) and for this reason women's luteal phases are generally a consistent length. The follicular phase can vary much more, from woman to woman, and from month to month for the same woman, which accounts for women's varying cycle lengths.